The ASIA PACIFIC ACTIVITIES CONFERENCE, known as APAC, is a prestigious interscholastic activity participated in by the following member schools (See table below). 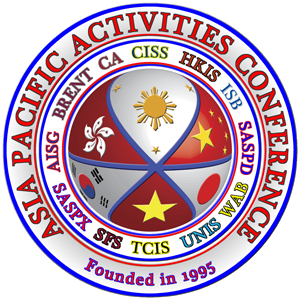 Many disciplines are included in APAC, including Theatre, Band, Choir, Dance, Orchestra, Forensics, M.U.N., Volleyball, Basketball, Baseball, Softball, Tennis, Swimming, Soccer, and Track and Field.  It is an honor to be chosen as an APAC representative for ones school.

Good luck to all APAC participants for this school year. 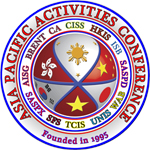 In 1993, a meeting took place between activities directors from Brent International School Manila (BISM) and Canadian Academy (CA) in Kobe, Japan to discuss the prospect of friendly international competition between their schools. In ways inconceivable at the time, their collaboration laid the groundwork for an organization that—two decades later—has touched and inspired thousands of students and educators.

In an attempt to include as many students as possible and best represent the breadth of talent in the region, APAC has strived to offer a well-rounded range of events since its inception. Volleyball, basketball and soccer were the fist tournaments to be held under the APAC banner, while choir was added as the organization’s first non-competitive event in 1997. An increasing number of athletic competitions and performing art exchanges were added to APAC in the following years. In addition to the aforementioned events, APAC schools today are proud to host tournaments and gatherings for dance, band, orchestra, tennis, theater, softball, baseball, swimming, forensics, cross country, track and field, rugby, table tennis, and badminton.

The success of the organization has led to growth. In 2008, APAC welcomed Hong Kong International School (HKIS), Shanghai American School-Pudong (SASPD), Taejon Christian International School (TCIS), Western Academy of Beijing (WAB), American International School of Guangzhou (AISG), and Concordia International School Shanghai (CISS) into the fold. The United Nations School in Hanoi (UNIS) joined in 2010, completing APAC’s expansion to a 12-school format. Quantifying the ways in which APAC has positively affected schools, students and educators is an impossible task. For many students, the school year is imagined in terms of APAC events. Goals are set, focuses are finey tuned, and obstacles are overcome in the pursuit of participating in this prestigious program. Through a sustained commitment to sportsmanship, learning and tolerance, APAC events serve to thoroughly enrich the educational experience. To further promote the concept of exchange, students are paired with a homestay family during their stay at a host school, providing a unique opportunity for the development of lasting friendships and new cultural interests.

APAC relies heavily on the dedication and passion of its school communities. Without the collaborative efforts of parents, administrators, coaches, teachers and support staff, students would never have the chance to participate in such a dynamic and sophisticated experience.

Over the past 20 years, APAC has served as a venue for international school students to share their talents with a regional community, learning and growing along the way. Some international school students have used APAC as a springboard for serious collegiate and post-collegiate careers in sports and the finearts. Others have been inspired by their experiences to pursue futures in education, politics, and philanthropy. For every APAC participant, though, there are two constants: a lasting sense of achievement and a recognition that activity outside the classroom is an essential aspect of good education.

Twenty years after the fist group of international school students boarded planes bound for foreign lands, the enthusiasm surrounding APAC events remains the same. Today, the organization is stronger than ever, and looks forward to welcoming another two decade’s worth of talented individuals to share in the spirit of respect, growth, and friendship that has become so deeply associated with APAC.